The story of the Iberian lynx (Lynx pardinus) is a tragic one. Some 150 years ago, many thousands roamed parts of Spain, Portugal and southern France. Yet by 2002, the familiar threats of habitat loss and hunting had caused those numbers to dwindle to fewer than 100, prompting the IUCN to classify the species as “critically endangered”.

Iberian lynx are specialist cats, in both their choice of habitat and prey. They live in the forests of the Iberian Peninsula and Mediterranean coast, and hunt at the fringes. European rabbits are by far their favourite food – the cats depend on them for over 80% of their diet. 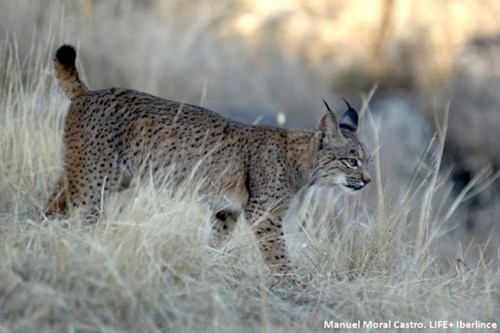 Though it looks like a smaller version of the Eurasian lynx, the Iberian lynx is a separate species. Image: Life Iberlince – Junta de Andalucía

Without the forests and the rabbits, the lynx cannot survive – so as their habitat slowly but surely gave way to roads and development, and outbreaks of disease wiped out their main food source, lynx populations began to plummet. With the species teetering on the brink of extinction, in stepped the IberLince project.

Thanks to its intensive conservation efforts, including captive breeding and reintroduction programmes, the lynx is making a slow comeback. From just a few isolated populations in southern Spain, it’s thought that some 300 cats now roam the region. In June last year, the IUCN upgraded the status of the lynx to “endangered”. “We’re on the way to saving the species,” Miguel Simon, director of the IberLince project, told the BBC at the time.

Since the start of 2016, 20 captive lynx have already been released, with scientists keeping tabs on the cats via tracking collars. In Portugal, the first successful captive-breeding attempt paved the way for the first reintroduction to the wild in late 2014 – a female named “Jacaranda”.