King of the mountain

King of the mountain 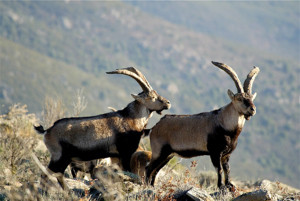 Four species of Ibex live in Spain: the southeastern, Rhonda, Beceite, and the largest horned, the Gredos (capra pyrennica victoriae). It was the big brother of the group I was after, as I had taken a very nice Beceite ibex just two years before, starting my quest for the Spanish ibex slam.

After spending five days chasing after an extremely large fallow deer (dambika) in Hungary, I felt well-prepared for España. What I thought was to be a walk in the park turned into one long trek, with only a very small tree branch as my only trophy in the first four days.

I made sure my Sako 85 combined with a Steiner 10×50 Nighthunter scope was spot on and readied my kit before turning in, quickly going down my mental checklist leaving nothing to chance in the morning. The sun does not rise until about 8 a.m. in Gredos because in mid-October they still haven’t turned the clock back. That gave my friend and guide, Juan Mitjans, of Fernando Saiz—Spain, and myself a much more civilized start time. 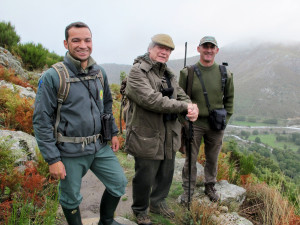 Our local guides Bienvenido and Regino had been watching a lone ibex grazing at about 5,000 feet up and about a 2.5 hour drive to the north. The old ibex come down to eat the soft chewing green grass because their teeth pretty much grind down after 12 years or so. At the lower altitudes there are no females to vie with the aggressive younger ibex. The combination of a good food source and no street fights suit the senior citizens just fine.

The climb was a gradual one at first. As with all mountain hunts, it lulls one into a false sense of security. Slowly but surely, you begin to hit areas of granite rock. That was especially fun as it began to rain and the rocks quickly obtained an ice-like surface. Next, the wind began to pick up and howled off of the mountain tops–not exactly the weather duo for high altitude hunting. We were ready, more than ready, to tackle any obstacle, and quickly took out our rain gear.

Our first sighting was four male ibex, none of which were to our satisfaction. We didn’t come to Spain to leave with just an average specimen. We crossed an area where a sounder of wild boar had rooted up everything in sight the night before. There must have been at least a dozen sus scrofa digging away, made quite evident by all the destruction up and down the mountain we trekked. 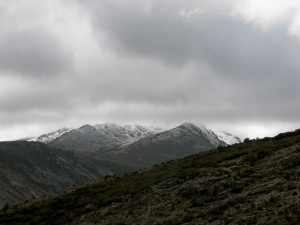 As the rain began to stop, we saw the sky was changing in our favor. About three hours into the hunt, I spotted the horn of an old ibex–one dark appendage in a sea of green and beige. On closer inspection through my Steiner 10×56 Nighthawk binoculars, I saw he was not the one we were looking for. A silver medal for sure, but as I was there for the gold in them there hills, he passed untouched.

Our gang of four studied him as he meandered by. I was given a quick lesson in just what to look for in a trophy ibex. The length of the horn should be over 80cm (30 inches). Study the 10-inch length from the center of the horns to the top of the nose, and consider that three times to gauge the length of the horn. Most difficult to judge is the circumference of the bases (between 9 and 10 inches is a go). You have to look over the length of the horns closely, as they may appear longer than they actually are. For age, count the rings. If near the base you can see a cluster of rings, you know it is at least 12 years old. Mature goats do not have much fat, so look for the thin ones with coats that do not have the luster of the younger animals.

About 4 o’clock we headed down the mountain. It always seems longer when you have nothing to show for after a day’s effort.

The next morning I was up at 5:00 a.m. with nowhere to go until 8 a.m. I felt the presence of ibex and, as the cold morning air filled my lungs, my mind remembering the many sighting of day one. As we marched up into the mountains once again, I realized we were heading back to the area that was supposed to be home to “Mr. Big.”

Slowly we headed upward and onward. I stopped to take in the beauty, color and smells of Gredos mountains, thinking just how lucky I am to be able to hunt in Spain (or anywhere for that matter.)

Finally we reached the area where the trophy ibex was seen feeding several days ago. As the old boys do not like to move far from a good feeding territory, my senses were on full alert.

We glassed every inch for 360 degrees from a comfortable rock formation. Finally, after 40 minutes or so (seemed more like three hours), one of the guides spotted him lying down in a thicket. We watched him for a good 15 or 20 minutes before he decided to stand up for a stretch. Big surprise, it was not the one we were after, but a young goat of perhaps 210 CIC points.

Not discouraged in the least, we continued to glass and soon saw another pair of ibex horns about 400 yards to our right. “It is him,” Juan whispered. By this time I had a good rest, so I set my Steiner 10×50 scope at just under 400 yards, and turned the red dot on. The Federal 165-grain Nosler Partition bullet was already in the chamber of my Sako.

“Okay,” said Juan “that is a macho boy, at least 245 CIC.” As he was pronouncing the last “C” in CIC, I squeezed off. Bang! He staggered and began to slowly move off. I let an anchoring shot go within the next three seconds or so.

I always reload immediately even if the animal falls straight down. Having seen all too many dead animals get up and run away, it is indeed a good rule to follow. He disappeared into a ticket but we could see the tip of one of his horns lying on the ground. All of sudden, everyone was high-fiving and hugging away. As we made our way down to the ibex, I had my Sako at the ready.

No need, as one of the guides had walked just ahead of us and we soon heard him yell “El Macho!” pointing to the ground. This is the sound all hunters quickly become addicted to: I know enough Spanish to understand it was an exceptional beast, as the guides yelled congratulations back and forth.

Upon reaching the ibex, it immediately became evident that he was an old one with very thick long horns. After we caped him, we measured him at over 250 CIC points with both a base and halfway measurement of over 10 inches. The long horn was 86 cm, Diana the Huntress had truly smiled on us that day, giving up one of her 15 year old subjects.–Peter Lewis Horn II